The Government of India is promoting online and digital modes of payments for goods and services. For any person to have access to these facilities it is essential that they have access to banks close to where they live. We at the UXO decided that it would be fun to visualize all the banks on a map of India. This is the first of a set of blog posts in which we shall discuss our results.

About the Data
We were able to find details of all the banks (commercial and cooperative) from the website of the Reserve Bank of India. The data included dates of establishment, addresses, type (rural, urban, semi-urban and metropolitan), and many other fields. We were also able to find details about individual banks from each bank’s website when we then merged them with our master data set that we got from the RBI.

We then geocoded the addresses of all the commercial banks using the Google Geocoding API. In case the Google service was not able to find the address we picked the nearest location that we could tag. In all, we were able to georeference approximately 125000 bank branches out of approximately 139000. We should also note that there are additional co-operative banks that we have not geocoded that will be included in a future post.

Adobe Flash Player will be needed to view the visualizations below.

All Commercial Banks In India

Below is a visualization of all the commercial banks in India showing metropolitan, urban, semi-urban and rural banks as classified by the Reserve Bank. The banks have been geocoded to within 1000 meters of their location as per google but we are constantly correcting it and updating the data. Each point has many parameters associated with it that include Name of Bank, Branch, date of establishment, addresses, type (rural, urban, semi-urban and metropolitan) etc. For the sake of clarity, we have only uploaded only a few.

Using this, we can also analyze districts and obtain state and district wise statistics of banks. We have generated such a map for Maharashtra.

Luminosity Data along With Banks in Maharashtra
We can also overlay other maps on top of the information of banks. These visualizations can be misleading sometimes since there are locations in India with little or no population where there is no need for many banks. In this instance, it would be interesting to look at other indicators of a dense population along with the banking information. We added a layer of the nightly luminosity data for Maharashtra along with the data of the banks. This way, we can view areas of the country that are electrified but are not serviced by banks.

As one might expect, there are parts of India with little or no access to formal commercial banks. States such as Chhattisgarh and parts of the North East lead the list with a dearth of banks. Comparing the luminosity with the location of banks we can also find places where there is some development but little access to banks. We have many other visualizations coming up including a time series animation of the growth of banks and the addition of co-operative banks to this data set.

In case you are having trouble viewing the charts above, you can also view them here, here and here. 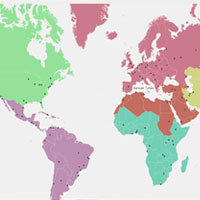 Study of 200 cities around the World 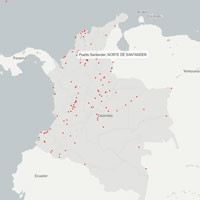 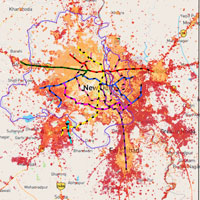